DO YOU KNOW NATIVE TURTLES WHERE DO YOU LIVE? 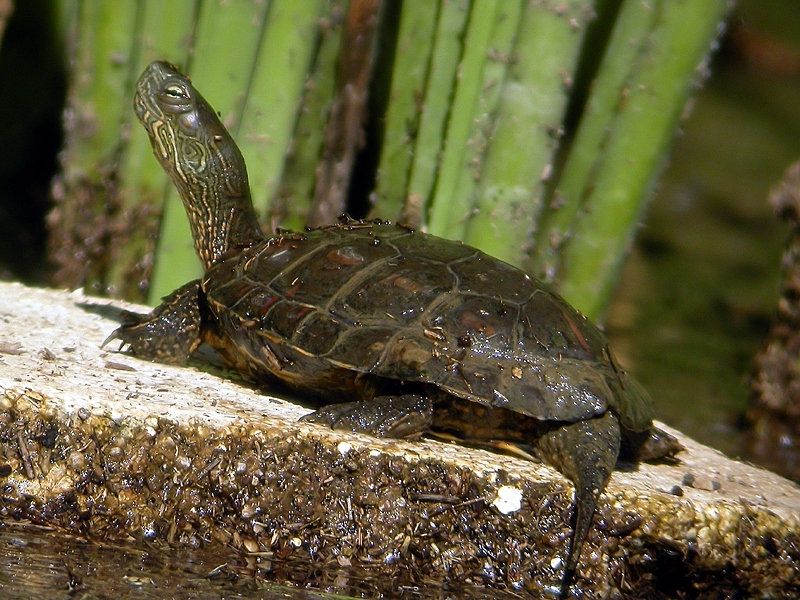 In Catalonia and throughout the Iberian Peninsula there are a series of species of turtles, both water and land that are native to here. Others have been introduced and are considered invasive species. With this article we want to explain which are the original ones in our area and some characteristics so that you can differentiate them from invasive species. 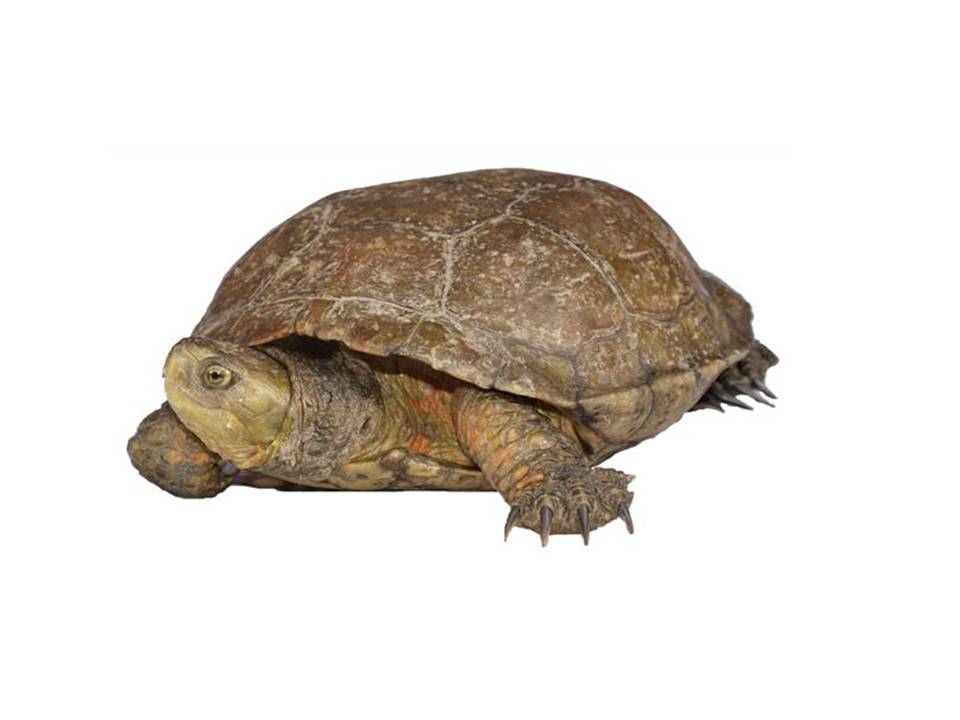 It is a water turtle that lives in quiet areas of rivers and swamps, it feeds on other animals and also on plant material. He spends all day in the water except when he comes out to sunbathe.

External appearance: It has a dark green or brown skin with small lighter brown spots that it can lose with age. It is a turtle that, due to the area where it lives, usually has algae on its shell that gives it a worn appearance. It achieves a size of about 15-20cm in length. The plastron is yellow sometimes with black spots. It also has orange lines in the area of the neck and forelimbs. They have a fairly long tail and the hind legs are flattened due to the habitat where they live.

How can we differentiate male from female?

In general, males tend to have longer and wider tails. They also have a slightly convex plastron to aid sexual riding. The females, on the other hand, tend to be larger, have a flat plastron, the tail is slightly shorter and weigh more. 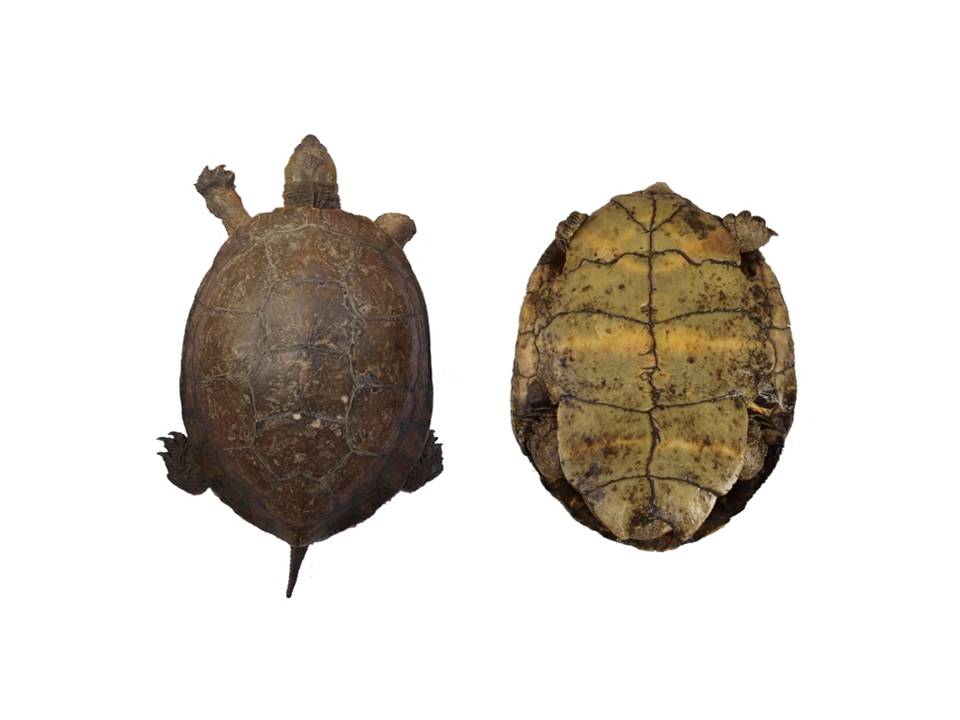 It is a species that hibernates from November to March, when weather conditions improve and the reproduction period begins. It is a species that due to the destruction of its habitat and the appearance of invasive species, the number of specimens is decreasing more and more and it is protected.

It is the other species of native water turtle in our area that lives in calm waters but with abundant vegetation of lakes, ponds or wetlands. It is carnivorous and feeds mainly on worms, small crustaceans, small fish, etc. 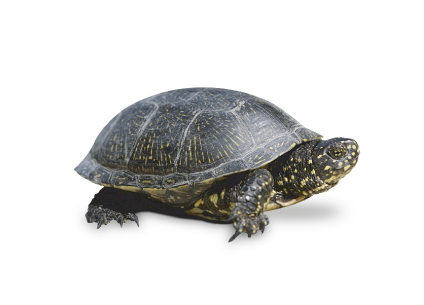 External appearance: It has a greenish-gray or black rounded carapace with yellow spots or lines. It is usually about 30cm long and is also characterized by having a fairly long tail. The skin is dark in color with yellow spots. The plastron is yellowish or orange with some black spots. It is also a protected and highly threatened species. It is believed that their disappearance in the wild is due to the contamination of the aquatic habitats where they live. Invasive species are also believed to have caused the freshwater turtle to migrate to other areas. It is also a species that hibernates during the months of November until March, which is when they resume their activity and begin to mate. 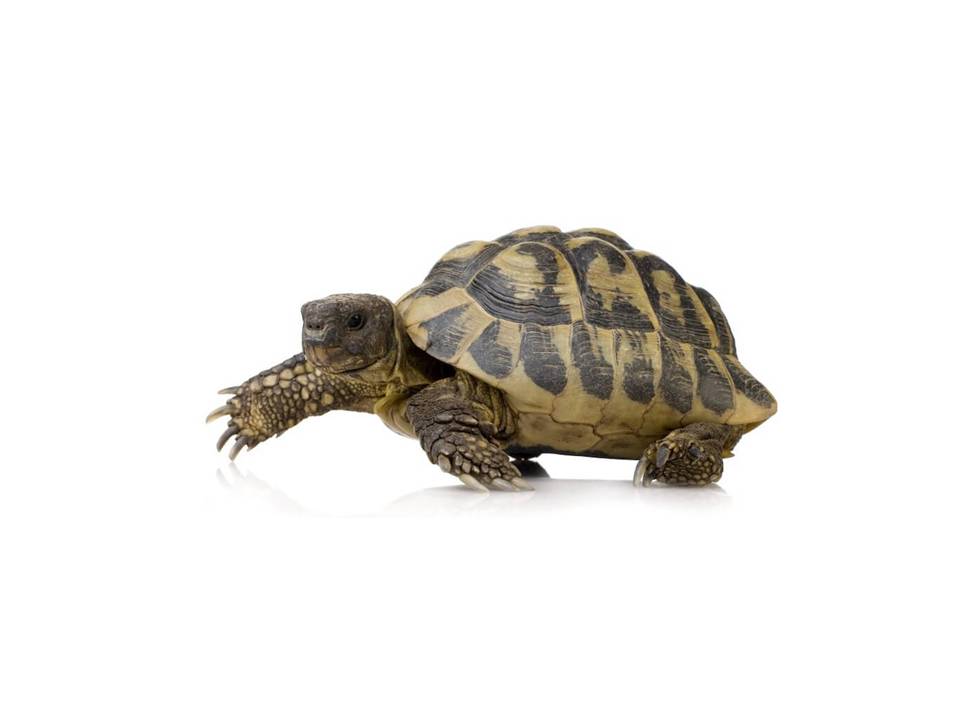 It is the typical tortoise of our area. It lives in all the Catalan Countries and extends to the Black Sea area. It is a herbivorous species but it depends on the time of year, in dry periods they can eat arthropods or a snail. The basis of their diet are varied leaves: alfalfa, dandelion, clover, rosemary, mulberry leaves, etc. It is a protected species and its commercialization is prohibited. 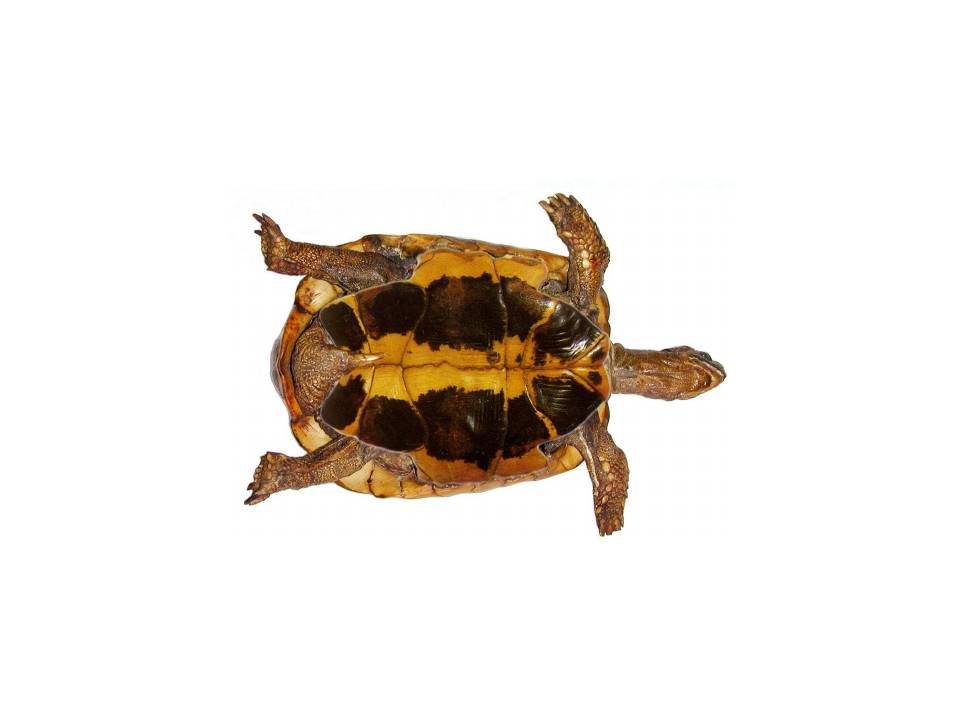 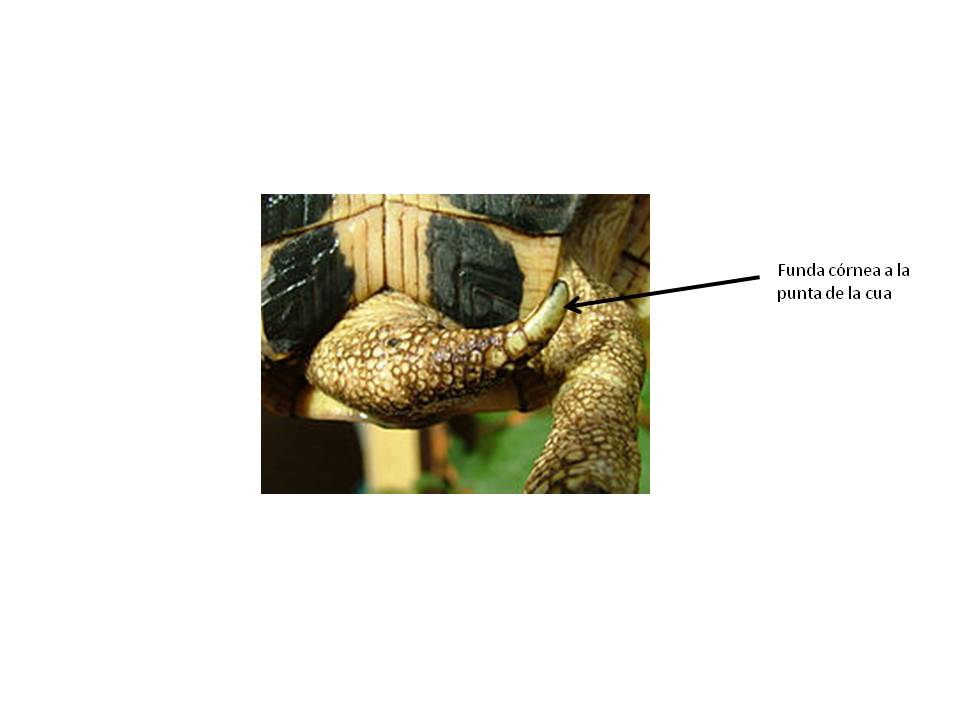 However, today there are hybrids between these species and we can find specimens that present both characteristics. It is a species that hibernates when autumn enters and temperatures drop. The ideal temperature to carry out this process is when the external temperature is 5º C. It is an important period in these species where their metabolism slows down. To carry it out, the turtles usually bury themselves 15-20 cm deep. When the month of March begins and the external temperatures rise is when hibernation ends and they begin to wake up.

It is one of the species with the widest distribution (Europe, Asia and Africa). It is not found within the Catalan Countries but it can be seen in areas of southern Spain and it is for this reason that we want to make a brief description. It inhabits arid areas where bushes and shrubs predominate. It is a herbivorous species but in times of drought it supplements its diet with an arthropod and also a snail. It feeds mainly on all kinds of vegetables and vegetables since fruits tolerate them poorly (they can cause diarrhea). In the Iberian Peninsula it is in serious danger of extinction and that is why its commercialization is totally prohibited.

External appearance: It has very similar characteristics to T. Hermanni but there are certain features that can help us differentiate it. The Spur-thighed tortoise has a characteristic spur on each thigh and the caudal shield is not divided. However, today there may be hybrids of these two species and make their differentiation more difficult. 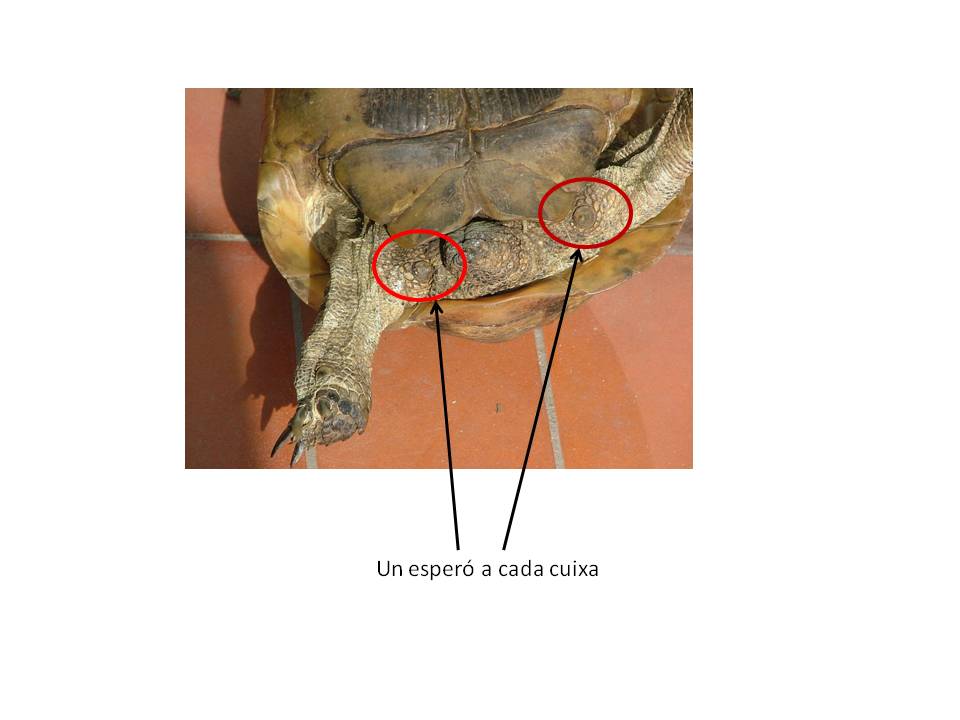 In autumn, with the drop in temperatures, the hibernation period usually begins when its activity and basal metabolism decrease. During this period they stop eating and burrow 15-20cm deep. Hibernation is a vital period for turtles and lasts until the end of March, when temperatures rise. It is a seriously threatened and endangered species, especially in the Iberian Peninsula.

In recent years, the release or abandonment of domestic turtles in natural spaces has caused an overpopulation of invasive turtles in our areas. These are species that are not native to our area but have had to adapt to survive. This, in turn, has led to some of the native species having been displaced due to the struggle for food or their number has been reduced. That is why we have decided to show you the most typical invasive species and REMIND YOU THAT IT IS TOTALLY FORBIDDEN TO RELEASE ANIMALS PURCHASED IN NATURAL SPACES.

It is a semi-aquatic turtle native to the Florida area (United States) that inhabits areas of swamps, rivers, wetlands, etc. For a few years it became one of the most popular species as a companion animal and its subsequent abandonment has meant that today its commercialization is totally prohibited both by individuals and in specialized pet stores. It is a carnivorous species especially young specimens and as it gets older it will eat more plants and vegetables. In captivity it can live around 25-30 years.

External appearance: It is characterized by having a dark colored shell with some black stripes. Females tend to be slightly larger than males, reaching up to 30cm in diameter. It is called a yellow-eared turtle because of the marked yellow line that it has on both sides of its head that it is characterized by being vertical, unlike other species. In adult specimens, it is very easy to differentiate males from females by a series of characteristics. The males are usually smaller, the nails of the front legs are very long and the tail is also usually much longer than the females. In their natural habitat they do not hibernate but because they have had to adapt to the climatic conditions of the area, some of them can pseudo-hibernate in periods of low temperatures. 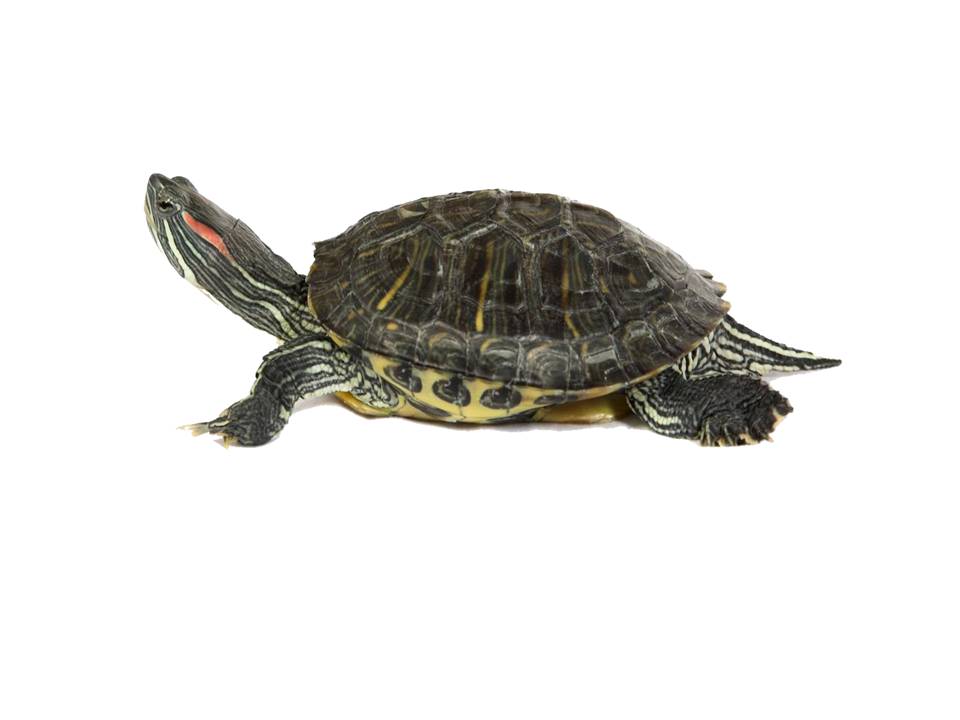 It is another subspecies considered invasive in our area. It is native to the area of the Mississippi River and the Gulf of Mexico (United States), which for many years became a very popular species among domestic animals. Currently its possession and commercialization is totally prohibited and together with the other subspecies (T. scripta scripta and T scripta trostii) it is included in the list of the most harmful invasive alien species in the world. It is a carnivorous species when it is young and tends to evolve into an omnivorous one at older age.

External appearance: The appearance of the shell is very similar to the other subspecies but it is very easy to differentiate due to the presence of two very marked red stripes on both sides of the head. It also has great sexual dimorphism. The male has more elongated nails on the forelimbs and the tail is usually longer. 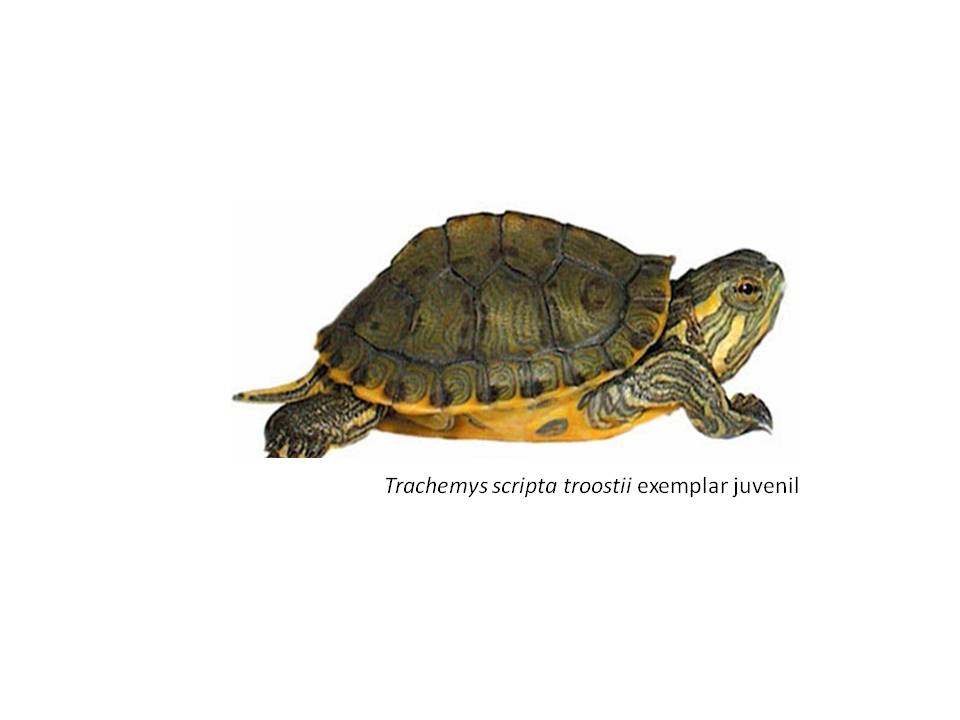 It is a subspecies within the Trachemys spp. That presents characteristics very similar to the yellow-eared turtle. It is also native to the United States from the Kentucky and Tennessee areas. It can be distinguished from T. scripta scripta by the placement of the yellow stripes on both sides of the head. In the Cumberland tortoise the stripes are usually more horizontal but sometimes it takes experience to differentiate them. Nowadays, because the commercialization of these species is prohibited, we can find other species for sale in stores. Today the most popular ones are native to Asia with species such as: Mauremys sinensis, Mauremys reevesii or other American species such as Graptemys pseudogeographica. We hope you liked this article and we also want to remind you how important is the RESPONSIBLE TENURE OF ANY COMPANY ANIMAL. AN ANIMAL IS A LIVING BEING THAT MUST BE CARED FOR AND MAINTAINED IN THE BEST POSSIBLE CONDITIONS. REMEMBER: EXOTIC ANIMALS ALSO REQUIRE PERIODIC VISITS TO THE VETERINARIAN.